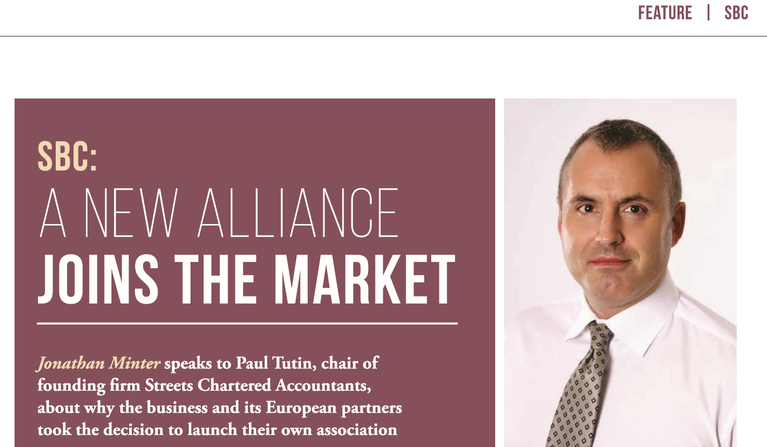 Jonathan Minter from International Accounting Bulletin speaks to Paul Tutin, chair of founding firm Streets Chartered Accountants, about why the business and its European partners took the decision to launch their own association.

For accounting networks looking to expand their international reach, joining an association or network is often the course of action taken.

In the case of UK-based Streets Chartered Accountants, France’s Berdugo Metoudi and Italian practice Costanzo & Associates, a different route appeared: to launch their own association. The resulting entity is known as SBC Alliance, SBC being the first letters of the names of its three founding member firms.

Speaking to the IAB, Paul Tutin, chair of founding firm Streets Chartered Accountants, says the three members had all been members of other associations and networks in the past, but felt their needs were not being met or provided for. However, while their experiences in these networks and associations were not fully satisfactory, they did enable the businesses to meet one another and sow the seeds for SBC.

Tutin says: “All three firms were members of the same established network, and so had developed an understanding of each other and shared a common vision around the role and purpose of a new association.

“It was felt that many existing networks or associations focus more on the development of the organisation as opposed to the business of the members, their clients and the generation of new clients and mutual business.”

He adds: “It was the opinion that in-country members that were part of some other networks or associations were not comparable with overall membership or well placed to service the needs of clients operating internationally, in terms of technical expertise and service provision.

“Often the make-up and recruitment of membership of some networks was driven by a necessity for members and coverage, and at times, with less consideration to the selection criteria for membership and the need for members to be able to fulfil the needs of international compliance and assurance work, as well as provide tax advice or in-country commercial advice.

“In addition, we felt that the more established associations or networks tended to expend members’ fees on more administrative matters or development materials that have not mutually benefited the membership overall.”

SBC launched with 30 members from across Europe, the US and Asia, with a combined revenue of around $150m, which would rank it as the 21st largest association by fee revenue in the most recent IAB World Survey. SBC’s current ambition is to crack the top 20.

In the shorter term, Tutin says: “Our aim over the next 12 months is to increase representation, especially within Europe and the US, but also in other parts of the world.”

He adds that another longer-term aim is to become a known association, widely respected by peers and the profession. “Ultimately, we seek to provide worldwide coverage and to be a truly recognised global association,” Tutin explains.

Ambitions to grow are one thing; achieving them, however is another. Asked how the SBC intends to differentiate itself from the competition, Tutin says: “The key for us is that members operate with shared values around independence and integrity. We all strive to provide the individuals, businesses and organisations they work with the highest level of professionalism, a personal approach and expert knowledge, all delivered in a timely and efficient manner.

“We are keen to establish an association that is truly commercially minded in terms of dealing with its members’ clients that operate internationally. We seek to provide access to services and support entrepreneurs, businesses and investors who, in growing numbers, operate cross-border and globally.”

In terms of structure, SBC has a board of directors and regional heads consisting of member firms. The typical profile of firms it is looking to attract are medium-sized players, headed up by principals who have worked in one of the Big Four or a top 10 firm.